The 68th Annual National Day of Prayer in Tillamook County

Garibaldi, Or – Under magnificent afternoon skies and a correspondingly beautiful sunset, the “Sunset Prayer Train” completed a historic 4.5 hour prayer journey in Tillamook County on the National Day of Prayer last Thursday. 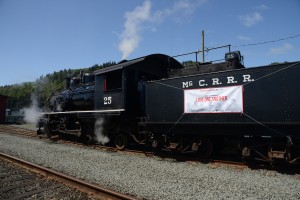 Townspeople cheered and honked car horns in support as the rugged and polished Oregon Coast Scenic Railroad Train (OCSR) passed through communities north and south of Garibaldi. A woman in Rockaway stood alongside the track, holding up a large American flag that fluttered in the breeze. Passers-by stopped as the history-rich locomotive’s whistle announced its approach and white steam plumes rose into the blue Pacific sky.

“God is great. And the love that He has for all of us was on full display on the prayer train,” said Tim Hall Garibaldi City Council Member. “It was an honor to be asked to join such an inspirational and blessed event. I’ll be forever thankful for the prayers I received. I’ll look forward to next year. I was glad to see so many councilors from other cities on the train.”

”That was the happiest group I have ever seen in the Lodge or on the train,” said Doug Rosenberg, Oregon Coast Scenic Railroad Past Board Member and owner of the 1925 McCloud locomotive. “It made me feel good just to be among them. … I was super impressed by the attitude of the crowd, everyone being happy, everyone introducing themselves to other people. I’ve witnessed a lot of events in our Lodge building, but never one that had the happy feeling of this one…. It was an honor to be involved.”

More than 160 Tillamook area residents prayed through a detailed program that focused on love and unity. It was led by pastors and locals who sang, prayed, and provided exhortation. Residents also prayed at their tables or by microphone as the train traveled past captivating shoreline scenes and lush wooded parts along the OCSR tracks. This year’s theme for the 68th Annual National Day of Prayer was “Love One Another”.

“Being on the train really helped us get to know our community. We were really blessed by that,” said Charlene Dennison of Bay City. “To see 170 people praying for each little town in the county, and then the state, and then the nation, it was pretty special, pretty remarkable.” Dennison rode the train with her husband, Gary.

Passengers sat at chairs and tables decorated with American flags, and a red and white labeled can – a “God Can!”- stuffed full of prayer ideas for the county. These covered a wide-range of topics affecting residents locally and nationally.

“I had people all stand up and introduce themselves and where they were from,” said Janiece Struloeff, a member of the Tillamook County Wide Prayer Team (TCWPT) who had a number of city officials in her rail car. “As we went through the different cities, we had them stand so we could pray and say blessings of prayer and encouragement over our city leaders. We were having so much fun on our train! We were just laughing and having fun. We’re having music, fun, food, and prayer. It wasn’t boring!” Struloeff and her husband, Mike, moved to Bay City from Happy Valley just over a year ago.

“What impressed me the most was the mix of people, said Kristine Hayes, Rockaway City Council Member. “The wide assortment of citizens and spiritual advisors who came together. I appreciated the thoughtfulness displayed for our emergency service responders and their families.… In a day and age where politics can be so negative, the experience reminded about how my service work is actually truly, about creating unity in my community.”

Prayers, singing. and encouragement continued on board while boxed dinners were served along with flag-decorated cupcakes during a stop south of Wheeler, where the train reversed and headed back to the Lodge at the Old Mill Events Center. Seventeen youth group members – with most wearing bright red “Love Your City” t-shirts- from Living Water Fellowship kept a close eye on rider’s comfort with frequent trays of water and refreshments coming through the cars.

“It was nice for us as a youth group to go and help out for something that’s important to a lot of people,” said Makyla Baldwin, 13. She and youth group member Erika Ebel, 14, baked and decorated three large flag-topped sheet cakes and 270 cupcakes over two days. “I really appreciated my friend Erika’s help”.

Two of Erika’s siblings were also involved. “They really enjoyed it,” said their mother, Denise Ebel of Tillamook. “I enjoyed it too. I liked how they had the different pastors going through the different cars and speaking. The whole trip was a really neat experience, and to have the body of Christ from all denominations participating in prayer. It’s a great way to create unity. ”

“The thing that really blessed me the most was getting to know our city leaders, and just how wonderful they were, and how they were so grateful for our prayers. They left with such smiles on their faces!” added Struloeff. “There was a real connection that knowing that the TCWPT was there to love and support them in prayer.”

“The entire event was just a super idea and so well organized,” said Rosenberg. “The Old Mill and OCSR were both thrilled to be involved. I hope we can do it again.”

“Without the support of the OCSR, the Sunset Prayer Train would only be a dream,” said Linda Hanratty, President of the TCWPT. “We are in deep gratitude for their community-mindedness and their over-the-top support.”