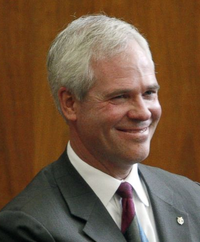 On Tuesday March 22, 2022 former Oregon Circuit Court Judge Vance Day addressed the public in Tillamook with a thrilling message of equality for all, freedom, and the Constitutional rule of law. Judge Day announced that he will be a candidate for a position on the Oregon Court of Appeals, that election is held on Election Day May 17, 2022 and is open to all Tillamook County voters.

According to literature from Judge Day he is, “a descendant of Oregon Trail pioneers…born and raised in the Willamette Valley. An Eagle Scout, he graduated magna cum laude from Warner Pacific University and earned his JD from Willamette University College of Law in 1991. An accomplished trial lawyer, he has tried over 300 bench and jury trials, Vance served the State of Oregon for nearly four years as the Chairman of the Oregon Republican Party. In 2011 Mr. Day was appointed to serve as a Circuit Court Judge and was elected to a full six-year term in November 2012…Near the completion of his term as a circuit court judge, Vance Day was recruited by the Christian Men’s ministry Promise Keepers to serve as the National President, to revitalize the organization…Today, working through the James Madison Center for Free Speech, he educates people across Oregon about our constitutional liberties and how we can responsibly respond to government overreach.”

To paraphrase one highlight of Judge Vance Day’s speech, we have, as American citizens inalienable rights given to us by our Creator God. These rights can be given up by American citizens, but cannot be legally taken. We can give up these rights only at the command of God, not at the caprice of the government. When the people of the United States stand for their inalienable rights and exercise those rights, God is pleased.

We were delighted and encouraged by the visit of Judge Vance Day and look forward to his return on May 2, 2022, 7:00 pm at Tillamook Christian Center at 7:00 pm where he will join us to watch his documentary on free speech, “The Fight for Liberty- The Judge Day Story”, and answer questions. The public is welcome. Refreshments will be served following.